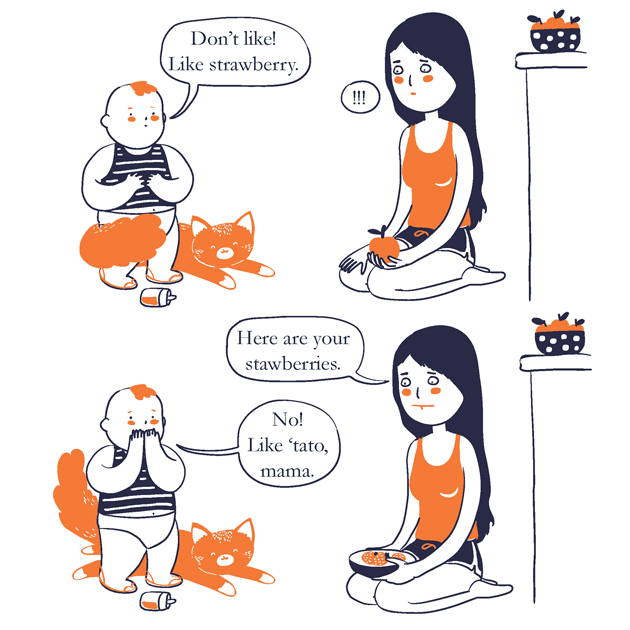 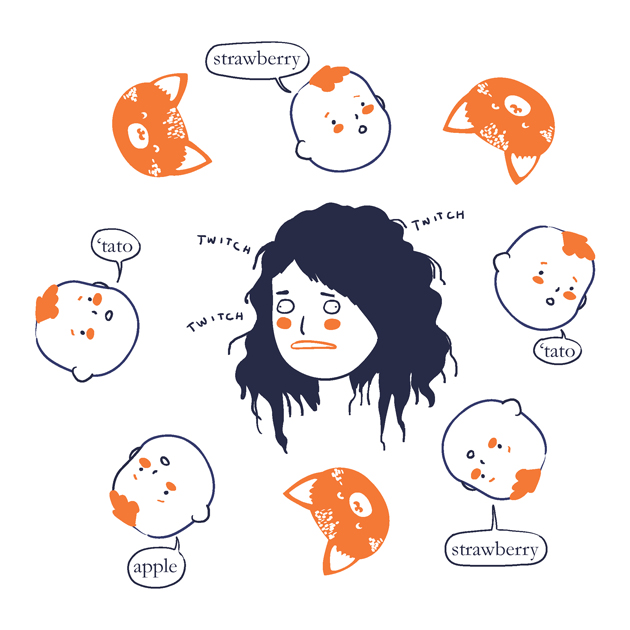 At the time, I was in my late 30s, and my so-called biological clock finally caught up with me and started banging on my ovaries.

And like a lot of events in my life, things don’t always go according to plan. It would take a bit over a year to conceive as I had a couple of issues in my reproductive plumbing. But after help from an OB, a lot of scheduled unsexy sex and temperature monitoring, it happened.

I don’t remember much of the medical jargon, and I was in a daze half the time. But this comic is pretty much the gist of what went on.

I had placenta previa. And based on my blood pressure readings, it was assumed that I was also preeclamptic. I was put on a schedule to give at 36 weeks and 6 days early — basically the same day I was scheduled for a routine checkup. It was expected that I’d be giving birth anyway as my placenta had barely moved. So I wasn’t surprised. I just wish I had my hair and makeup done that day so I’d look halfway decent in photos. I’d check Facebook and a lot of my friends who had given birth had crisp eyeliner, airbrushed skin, and blow dried hair. But not me. I looked like a marching band had trampled on my face in all of my photos. You bet I didn’t share those on Facebook.

Based on nurse and nurse assistant comments, I may hold the record for “tiniest veins in the world”.

I don’t know what’s more unpleasant: getting a catheter inserted into your pee hole, or a paper cut on your eyeball.

Was I nervous? I don’t quite remember. I did know of someone who had to stay at the hospital for a month after giving birth. She was also preeclamptic. She had a seizure, and was “out” for what seemed a very long time. So seeing I could have possibly gone through that frightened me a bit. But it frightened my husband quite a bit more.

I just hoped the baby would come out okay.

I was eventually wheeled into the O.R., and I can’t recall if I was given a spinal block or epidural. All I know is that I couldn’t feel my bottom half moments after. 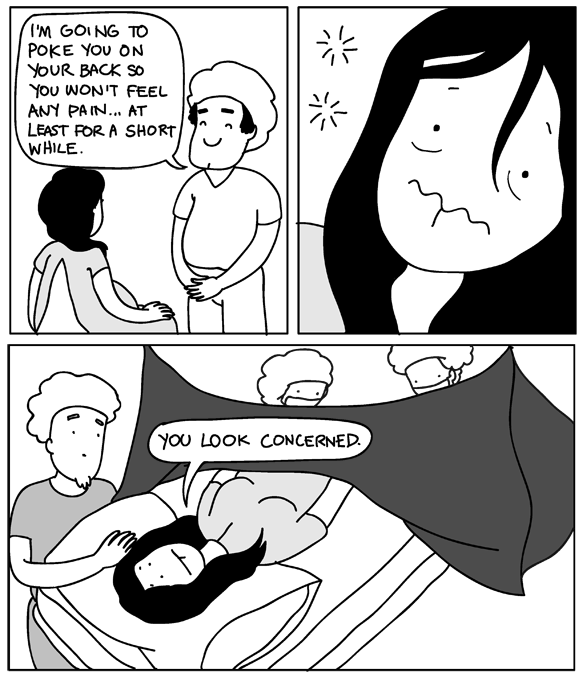 My husband was a good companion as always. He comforted me. Caressed my head. Told me that I peed a lot upon checking the pee bag on the side of my bed. Apparently, it was a good sign that I peed quite a bit. I forget why. 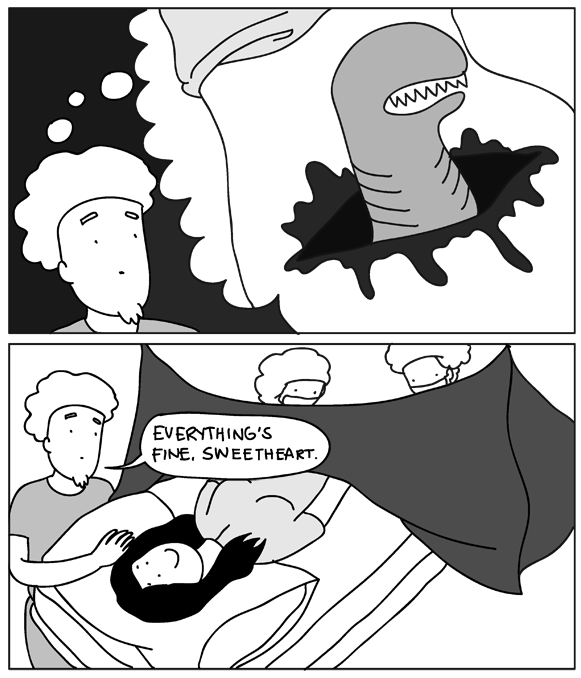 “You will feel a lot of tugging”, the doctor exclaimed. That has got to be one of the strangest sensations. That tugging. It’s like you feel like your entire bottom is being pulled apart, but you don’t feel any pain — until later, when the medication wears off.

I gave birth to a beautiful, red-headed little boy. The nurses seemed pleasantly surprised. I, too, was sort of surprised. But not really, considering how genetics works. While my husband has light blond hair, green eyes, and skin as white as snow, I on the other hand, have black hair, brown eyes, and skin as yellow-beige as Nars Creamy Concealer in Custard.

I had to stay at the hospital for a little while longer. The doctors and nurses seemed very concerned about my blood pressure not going down. It hovered around 200-something over 100-something, so I was given a combination of medications to help keep things at a normal level.

My son didn’t latch on. And my milk output wasn’t Niagara Falls great. I was given a hospital-grade breast pump to draw more milk out. That, and I was given a supply of formula to supplement. Though I tried my best to feed the baby breast milk exclusively. Out of everything I’d been through, this is what caused me the most stress. It’s often said “breast is best”, and I felt like a failure every time I couldn’t pump enough milk, and my son was given a bottle of formula instead. 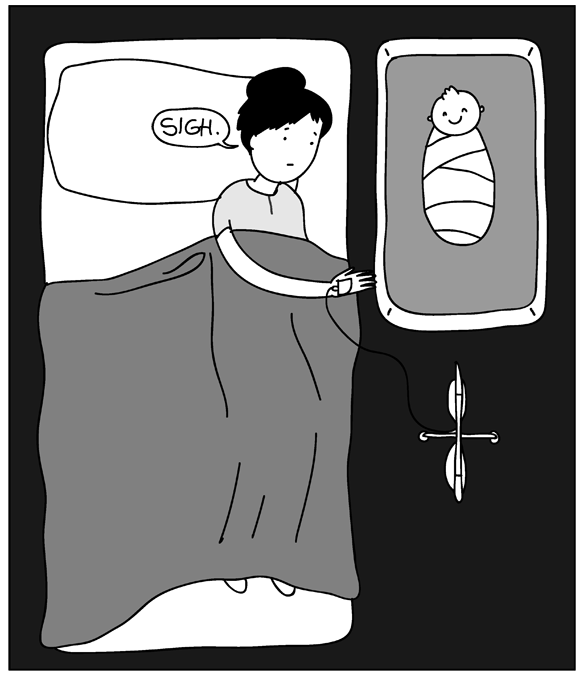 Nights were a bit lonely because everyone was asleep. But the nurses would come in to check on me every once in a while.

I loved my nurses. One gave me ice chips when I was feeling dehydrated. One wiped my bloody, clotty vagina when I was writhing in pain and couldn’t get up to the bathroom. And when things were unbearable, I was given lots of pain medications. 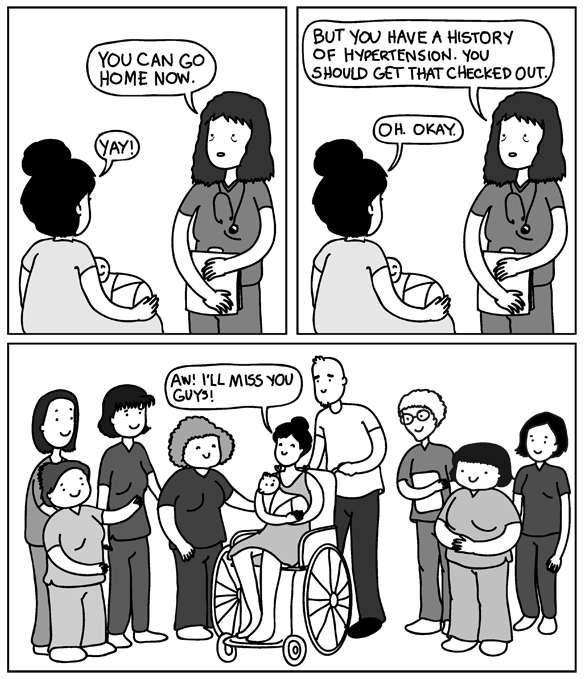 Leaving the hospital was bittersweet. I felt like I made some good friends.

But I couldn’t wait to bring our son home. And at that moment, I was happy. Everyone was happy.

And my cat had something new to play with.

*Side note: Yes, my car seat was facing backwards when we went home. This was just faster to draw.